1. The family and I went to northwest Arkansas, Eureka Springs was where we stayed and it was absolutely beautiful in the fall. I don’t know why we picked it, other than my wife and I had talked about going for some time and just never made it there. I’d also add that it is only a 6 hour drive away, which means that we’re not spending a day driving to Colorado or New Mexico (which I love going there as well) and a day driving back. We arrived in Eureka Springs on Sunday evening, stopped by the grocery store, and cooked dogs and brats for dinner. We were on the north side of Beaver lake, which means that the sun set in the backyard for the most part, so that was a nice way to spend the evening. 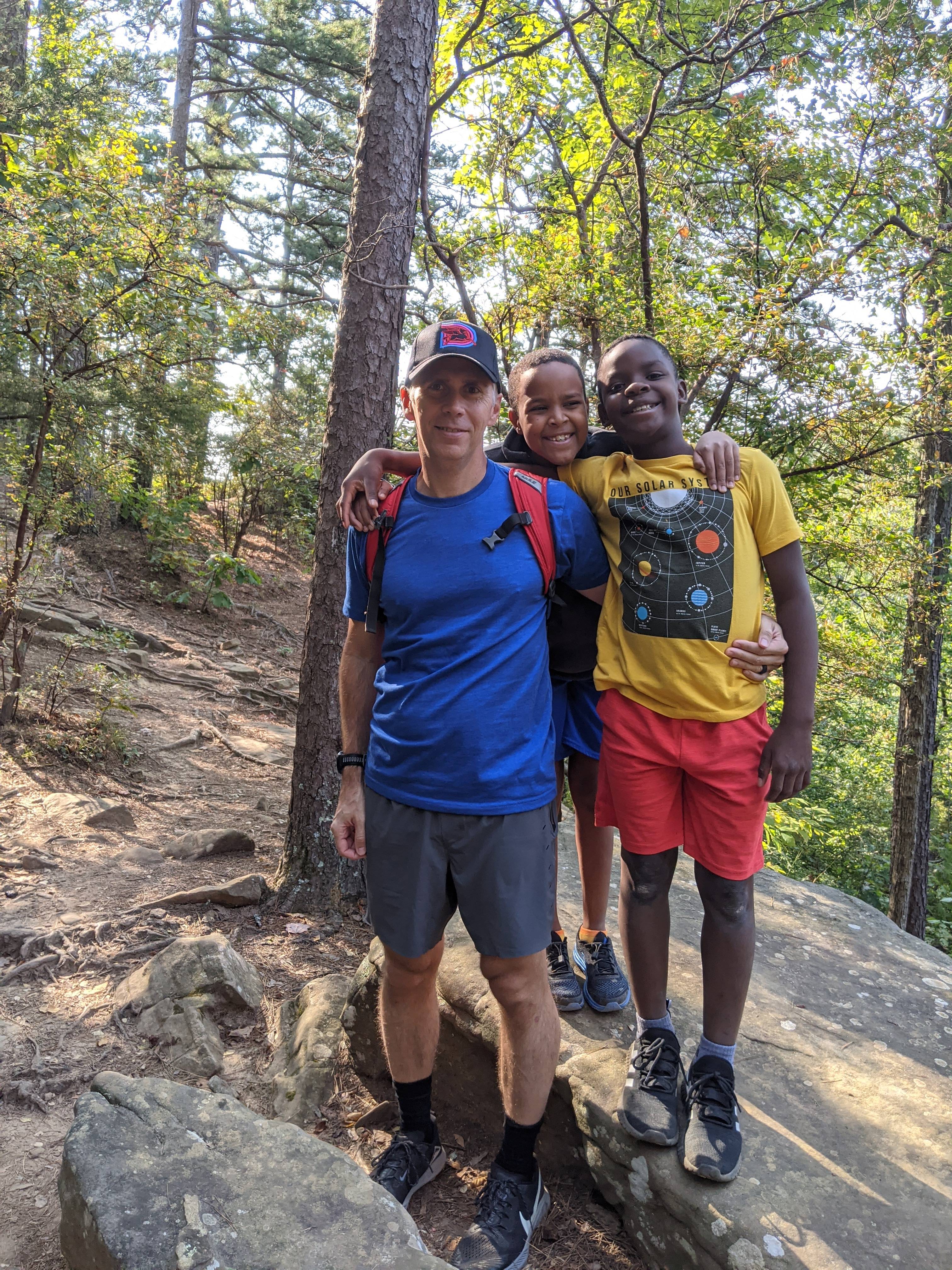 2. We woke up the next morning, did a short hike near our cabin, stopped at Leatherwood City Park to check out, and then went into town for half a day. I knew that Miranda would want to buy soaps, bath bombs, and bespoke chapstick. It’s the one thing she really likes buying and I’m happy to oblige. A lot of these Southern towns sort of do the same thing, which is they have cutesy shops and that’s just sort of the deal. Downtown Eureka Springs is really neat, lots of old buildings and we were told that the older buildings were basically hand-made from immigrants. We had lunch, and then we had an appointment for the zip line in town.

We basically had to talk Fitsum into doing the zip line before the trip even started. He agreed to do it and I’m really glad that he did. We arrived at the zip line place of business, got suited up and we were on our way. The first 6 lines were basically practice. Showing us how to use the brake, when to slow down, etc. To start off, Fitsum was scared and said he couldn’t do it, but he did. Youssouf didn’t blink. Not one time did he blink. He was off and running. By the time we got to the 7th line, it was 2,000 across, 300 feet above the ground, and went 45 to 50 miles an hour. The first person who rode that sucker seemingly rode for 30 seconds. By the time that we went, I think Fitsum was last and he really didn’t want to do it, but because he was less than 100 pounds, he had to go with the guide, which was perfect because he would go if he could go with her. Fitsum makes the ride, gets off, and says, “Now I know what it’s like to be alive.” The entire experience was great and well done, the guides were all terrific as well. They were patient with the kids (and adults).

3. That was the end of the day and I don’t know how it could be topped. The next day we got up relatively early and made our way to Whitaker Point. I think we arrived around 9:30 or 10:00 in the morning .It’s about a 2 hour roundtrip hike and the idea is that you hike to this point where it basically looks like you’re standing on a really dangerous cliff, but it’s really not that dangerous. Yes, you do hike close to the edge of some cliffs, but if you’re safe it is fine. It was a good and pretty hike. Again, Arkansas in the fall is good stuff.

That afternoon, we head back towards Eureka Springs and the boys wanted to go to a cave, so we go to Cosmic Cave. I think the boys loved it and caves, in general, are really neat. We head back into town, and I think we go out for dinner in Eureka Springs.

4. The next day, we aren’t sure what to do. We’ve done with going into town and there’s not a ton of hiking in the Eureka Springs area other than Leatherwood Lake. Hiking around the lake didn’t really appeal to us. So we headed to Hobbs State Park with the hope that we’ll enjoy it. We do. Before we even get there, a motorcycle passes me on the way and not more than 30 seconds ahead of us. We don’t actually see what happens, we only see the aftermath. A deer apparently jumps out in front of the motorcycle driver, he hits the deer, which was dead on arrival and across the highway, the rider was laying on the shoulder of the road and I stop the car, pull over and call 911. The rider was fine, he had a broken collarbone and probably a concussion as he had memory issues. The local emergency response was a woman in a small truck and two guys in flatbed trucks. No ambulance or anything like that. We leave the scene after everyone has shown up and it’s already been an interesting area.

We stop at the park headquarters and they recommend a half-day hike which ended up being fantastic. We ended up hiking to a lake where there were kayakers having the time of their lives. The water was calm and the paddling seemed effortless.

We told the boys that there was a cave nearby and they want to do another one, so about 5 minutes away was War Eagle Cave and again, the boys loved it. The entrance to the cave is huge, not a small hole. Big enough for bats to fly through, which is really fun. A totally different cave and the guide was really informative. We had take-out for dinner and we called it a day.

5. I’d definitely recommend going to the area. If you like hiking, there is a ton for you. If you love mountain biking, I think you’ll love it as people talked about that aspect quite a bit. Almost everyone we were around wore masks. Guides, waiters, cashiers, etc. They all wore masks. I’d recommend for sure. We’d probably have to work a bit more to find hiking that we like, but we probably would stay near Hobbs State Park.