This idea of creating a post about my life in charts really didn’t culminate unit l recently, but since about December 27, 2019, I started tracking me doing push ups. I had a conversation with my brother-in-law about a guy that did 100 push ups for a year. I thought I could do the same thing. That meant that I couldn’t miss a day and I was lucky enough to be able to do that. What started as just tracking push ups ended up tracking a handful of things through the year. And since I had all of this information, I could create some charts that displayed what I did through the course of the year.

As an aside, I utilize Loop Habit Tracker to track my habits. And really, these are all things that I wanted to be habits. I thought (and I think it proved to be true) that if I consistently did these things, that my life would be better.  As for the Loop Habit Tracker, it is dead simple, you can add a reminder about if you’ve accomplished the task for the day and the only thing it allows you to do is to check if you did the habit. That’s it.  It has zero bells and whistles and it has zero advertisements. It will also do a nice job of displaying the consistency of your habit and also provide the various streaks that you are able to go on through the course of using the app. If you want it to do more than to just check things off (i.e. you want something to keep track of notes or different things), then this is not the app for you. This app will let you know your current streak as well as your current score, which is probably some sort of success rate

These are also things that made my life better and for the most part, these things are free. The books cost money, but that’s it.

Here are the habits I tracked this year in comparison to the number of days where I started tracking the habit. As an example, I didn’t start journaling until April or so, thus the available days is less than 366 (2020 was a Leap Year). Also, the “Current Score” is from the app and I don’t know how that is figured. I’ve done push-ups for more than a year straight and only have a score of 95%. I suppose the streak is what’s important now. 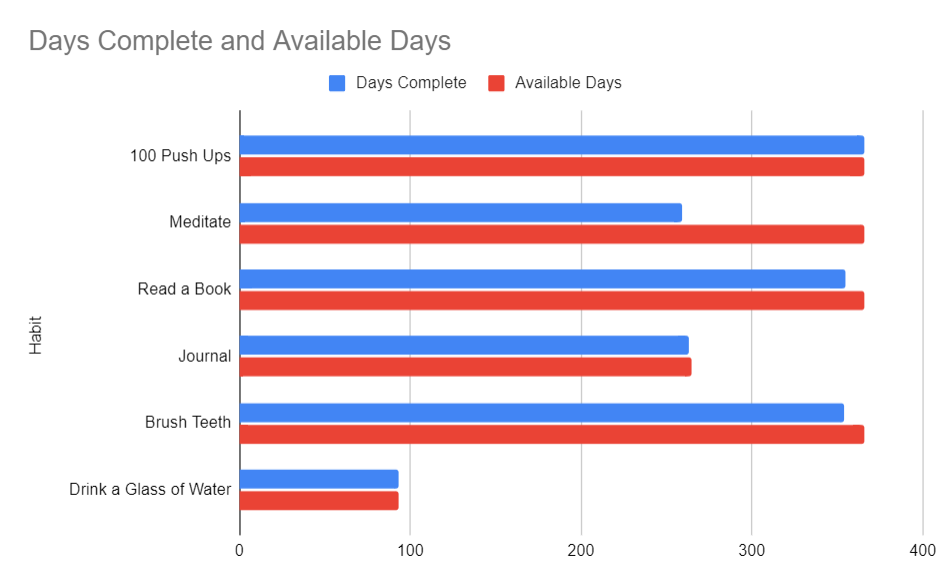 Brush Teeth: I actually think I started using the habit tracker because I was doing a terrible job of brushing my teeth at night. I would just get tired and go to sleep. That’s gross and it was something that I thought I should fix. So, I set the reminder to go off at 8:30 p.m. to brush my teeth and it eventually I can say that it’s a habit that I simply don’t break any longer.

100 Push Ups: This was one where I wasn’t going to be able to miss and I also realized that it took very little time out of my day. I can do approximately 100 push ups in about 2 minutes. I think when I first started, it would take me about 4 minutes, but after a while, you get good at it and you eventually whittle down that time.

In terms of how I do them, when I first started, I would just go until failure, then do that again, and again, until I got to 100. I ran across this random guy from Australia setting the record for push ups in a certain amount of time, and he did 15, then took a quick break, then did 15 more, etc. So I pretty much do that, except I do 20 rather than 15, take a 2 or 3 second break, then do 20 more, until I get to 100. I haven’t timed myself in quite a while doing this method, but I am this usually takes me less than 2 minutes to do 100. So, for 2 minutes out of my day, it seems absolutely worth it. Am I better for it? I guess. There are days where 100 push-ups after a long run seem stupid and then there are days where 100 push-ups is a walk in the park. I am probably stronger. I’ve done days where I’ve tried to see how many push-ups I can do at a time and I can do 75 without a break in my first set. I am sure that when I first started, I could maybe do 35 or 40.

Meditate: This is one where there is no streak. Like a lot of people, I took the Yale class on happiness (a.k.a. The Science of Well Being). I’m really glad I took it, I learned a lot. And what I learned is that we as humans are really hard at predicting what makes us happy and the things that really add to happiness are getting enough sleep and exercise, being grateful for the things in our lives, it’s really important to savor things in life, meditate, be kind, and value time over money. That’s a reduction of a really great class, but that’s it in a nutshell. So, the idea of meditating was not something that I really was excited about, but I gave it a shot and truthfully, once you get to a point, it is about learning how to be quiet, be with your own thoughts, and how to breathe. For me, it’s been great for helping me to be more thoughtful with prayer. I don’t get to do this every day, but I do this almost without fail 5 days a week.

Current score: 77%
Current streak:  Typically on weekends, I don’t meditate, so streaks are 6 days at best

Pick up a Book: I wanted to read more in 2020 and so I did. Part of process was to simply agree that I would pick up a book every day. There would be some days where I would literally read a paragraph and consider the goal accomplished, but then there would be other days where I would read for an hour. I read eight books this year, a couple of them were 700 page books, so that’s probably two normal sized books right there, but who is counting. I also am currently reading H is for Hawk, continuing to read the 5 books that are part of The Hitchhiker’s Guide to the Galaxy (I’m currently reading The Restaurant at the End of the Universe), and Lincoln in the Bardoo. I know I’m a monster for reading three books at the same time, but it’s what I do. I’m not always in the mood for a serious book. I also realize that not all pages are made the same and maybe the better metric to track would be words read, but that’s not something I’m doing and can’t do very easily. 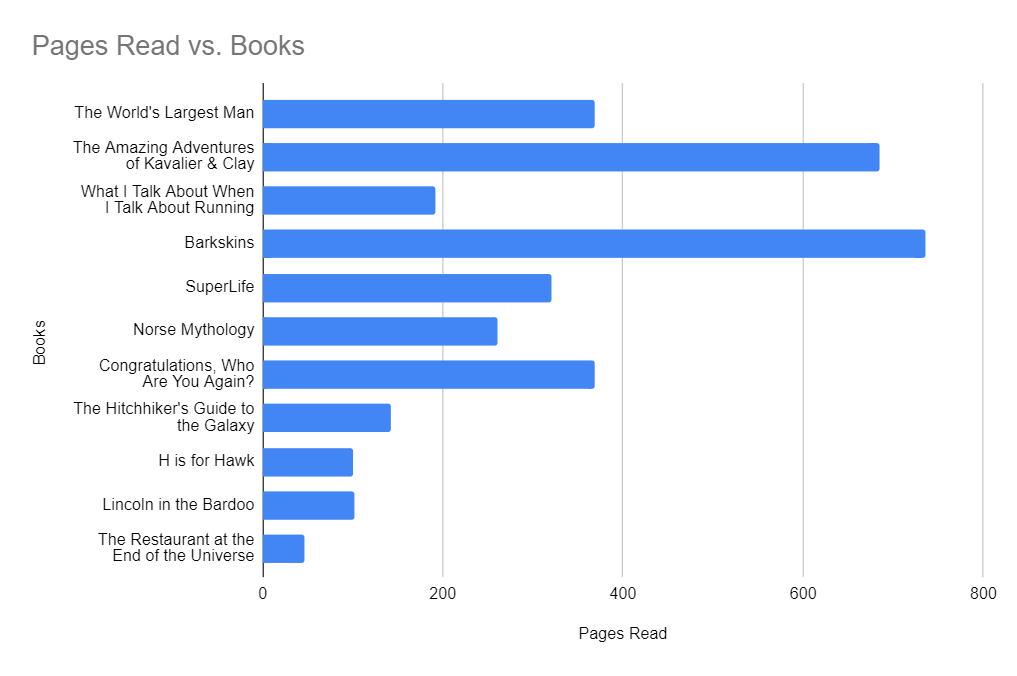 Journal: This was part of the happiness course, to just write down every day something I was grateful for during the course of the day or something that made me happy or how I helped someone that particular day, whether it be a client or a friend or family member. The happiness course recommended an app that I did download and it is nice because it does allow you to take notes and journal about the kind things that you did or the grateful things in your life, but it was repeating the work I was doing on the Loop app. So, I found just a blank notebook and started using that. I decided that I would read and journal basically when I got up in the morning. Rather than scroll on my phone or check Twitter or whatever, I would write down something good from the day before and then I would open a book and read for five minutes or however long I wanted to read. Once it became part of my routine, I’ve never looked back. Also, I think I forgot to check the box on a couple of days so my streak doesn’t really match up with what I’ve done. I really don’t think I’ve missed two days journaling, but it’s fine. It’s a lesson to make sure and check the box that it was completed.

Drink a Glass of Water: I didn’t start this until late in the year and after reading Darin Olien’s SuperLife. There are some extreme ideas about water in that book, but one of the ideas that I thought I could tackle was to get up and drink a big old glass of water before having coffee. Logically, when you sleep you’re not drinking water and that’s probably the longest we go without drinking something. It makes sense to get a bit of water in the system first thing in the morning. I’d also add that I usually run or do something active six out of seven mornings and it made sense that I was drinking something other than just coffee every morning. We’ll see if it has any long-term benefits, but this is a really easy thing to do, while the kettle is warming up, I drink a glass of water.